Watch (or rewatch) the best two hockey highlights of the summer: the save and the goal

It has been a couple of weeks since our last Charts of the Week, but there has been a lot going on with market movements over the last month or so, some good and some bad. We have seen strong market breadth through the first two thirds of August, followed by poor breadth in the last third. When we say market breadth, we are referring to the technical measure of the market that gauges the strength or weakness of moves of major indices. Specifically, it refers to how many stocks are participating in each move in an index or stock exchange. Sometimes it can be difficult navigating these up and down swings, but historically, after having already experienced a significant correction, these types of movements can often project that markets are trying to find their footing/support and are often followed by strength as we will illustrate in the following charts.

We wanted to first backtrack to how oversold equities were in mid-June when less than 2% of stocks were above their 50-day moving average (some refer to this as market capitulation). See the chart below that shows these points in red where this was the first occurrence in six months. Shortly after that time, we opined that this was a strong set up for a summer rally. The S&P 500 went on to advance almost 18% on a total return basis over the following two months to mid-August. It has since pulled back from there, but we will discuss that next. In the table to the right, you can see how markets have historically performed the last 20 years over the following year after these occurrences, averaging a median one year return of 25% compared to 11% for all other periods. With all charts/tables that follow, we disclose that past performance is not indicative of future results. 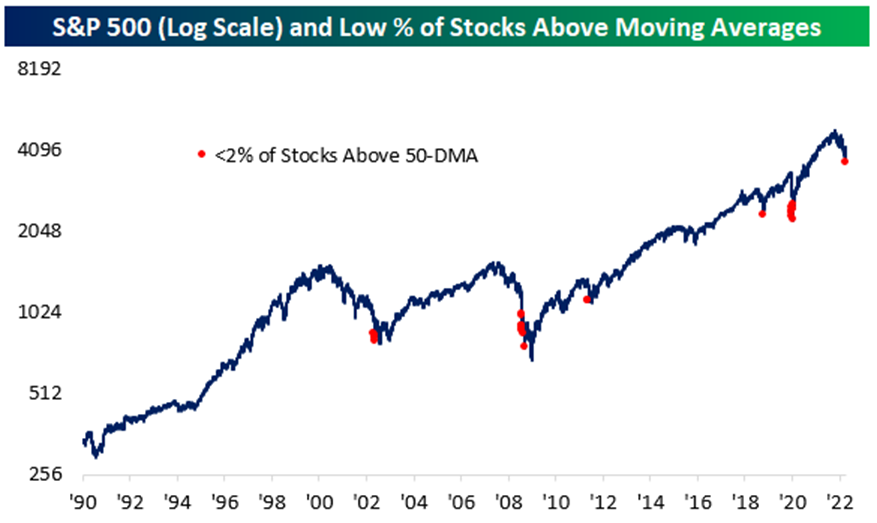 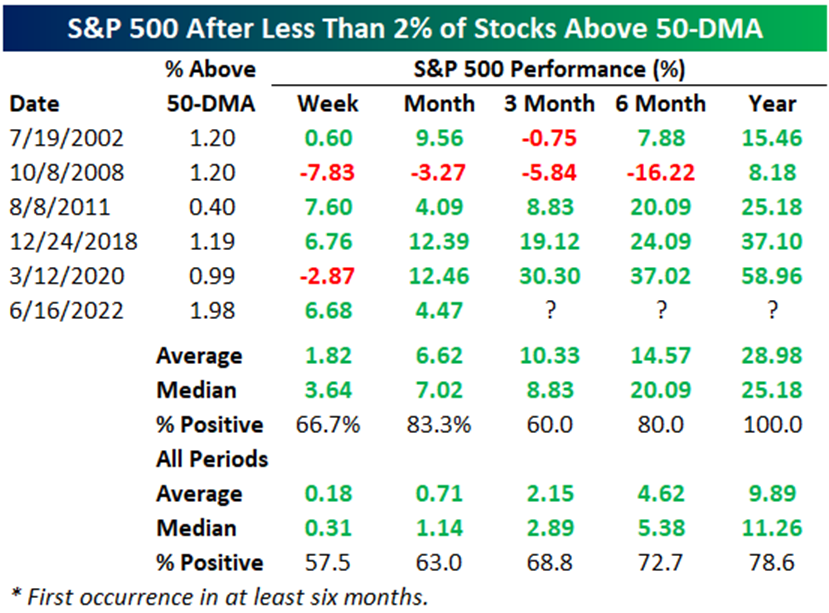 Fast forward to mid-August, near the end of this summer rally. We wanted to point out that on August 12th, the up-volume on the S&P 500 was greater than 90% in two out of three days while it was below its 200-day moving average. This was the 28th occurrence since 1985. In 100% of these past 27 instances, the S&P 500 has been higher one year later with an average return of 19.3% with only a maximum average drawdown of 5.1%. 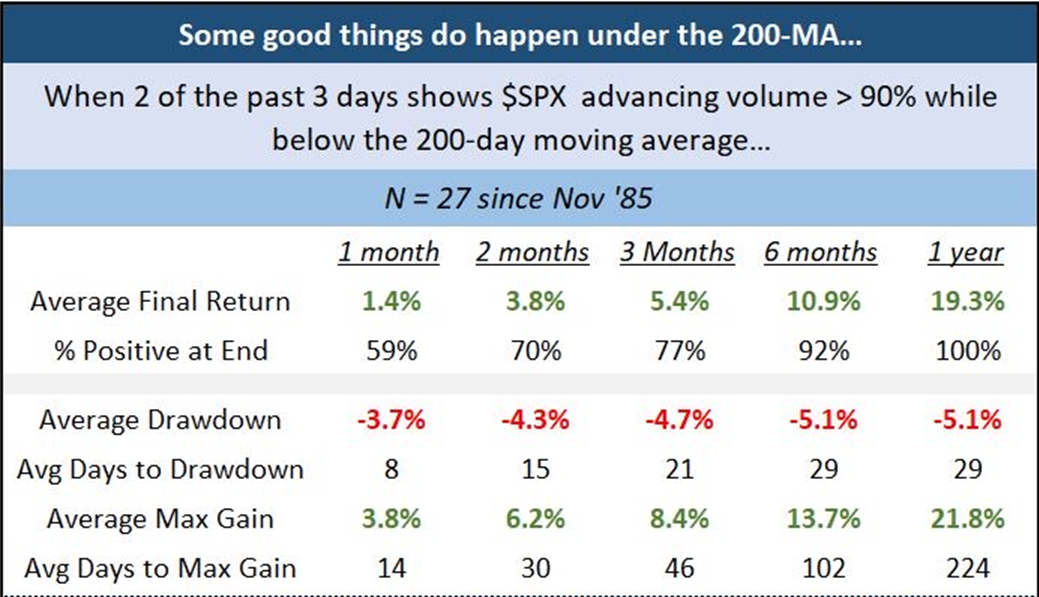 Also on August 12th, the S&P 500 closed at a level that was more than 50% off its recent peak to trough decline. This is a very positive sign historically. When this has occurred in the past, the U.S. large cap stock market has never moved back to new lows before reaching a new closing high. In addition, one year later, the S&P 500 has been higher 100% of the time over 15 occurrences since 1956 with a median return of 18.6%. 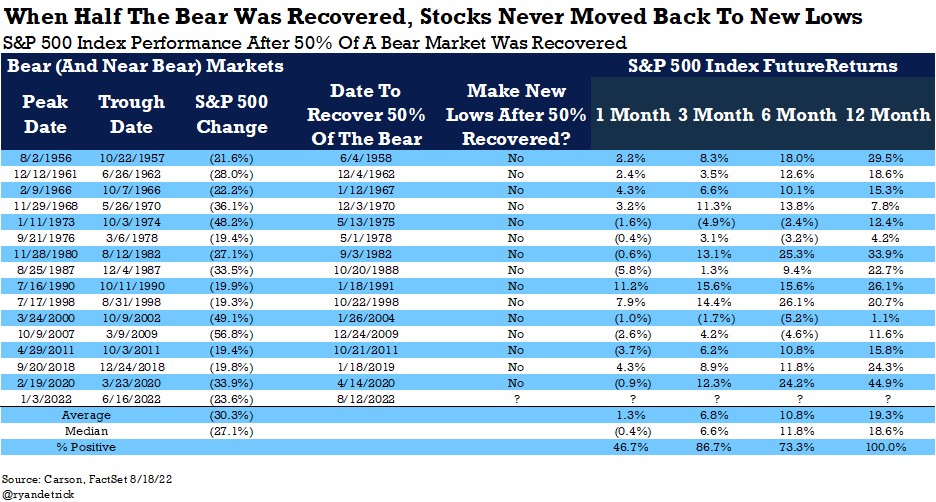 As we first noted, markets have recently pulled back from this rally, with very poor market breadth some days. This is somewhat concerning, but one positive sign is that it hasn’t occurred with an accompanying new low. On August 26th specifically, we saw a rare occurrence where the S&P 500 hit three parameters in the same day, where there was greater than 98% declining volume, where it was above its 50-day moving average and where it was below its 200-day moving average. This has only happened four times since 1985. As you can see, all observations were higher one year later with an average return of 19%. 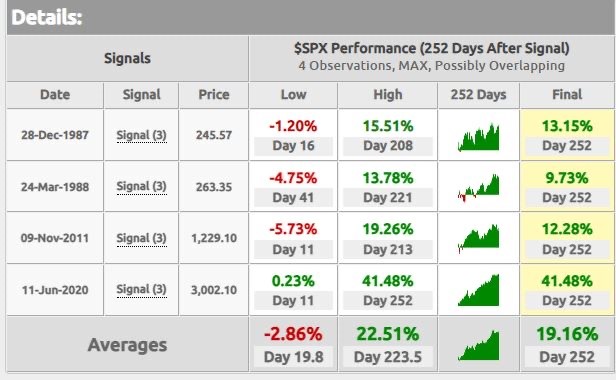 In addition, earlier this week the S&P 500 printed a rare -13.7% on the McClellan Oscillator. This is a market breadth indicator that is based on the difference between the numbers of advancing and declining issues on a stock exchange. Since 1986, the S&P 500 has fallen below -13% only 15 times. The table below presents each of the 15 times it has occurred and the year-forward returns. In all cases, the market was higher one year later with an average return of 24.5% with an average drawdown of -8.8%. This could indicate higher volatility ahead, but one could take this positively in that this has occurred where the stock market is at a higher level than the June lows. 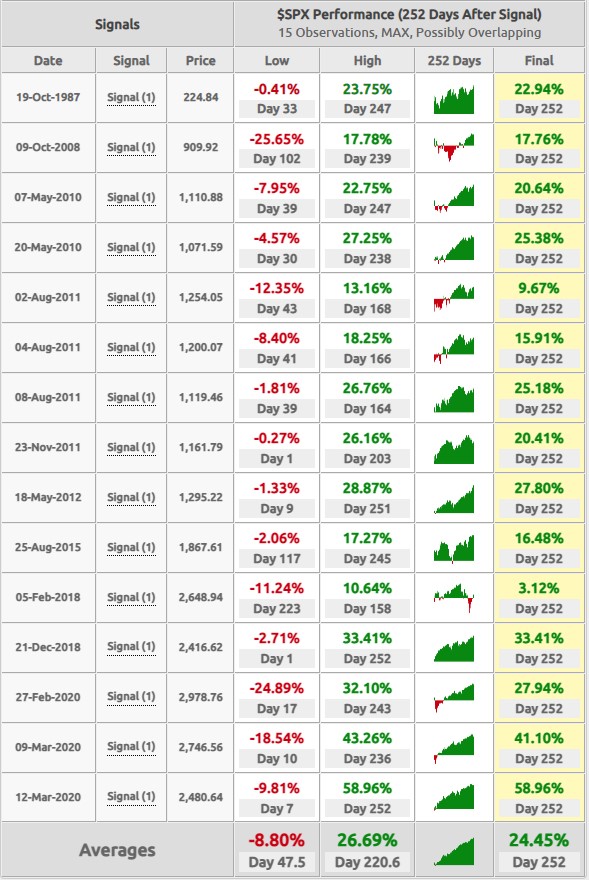 We will finish off this week’s charts with a look at recessions and how stocks perform before and after. Many people believe that once a recession starts, or even a few months prior, they should get out of the stock market. However, as you can see from the chart below, the stock market is a forward-looking mechanism. Once it becomes possible that a recession may be coming, the market begins to react negatively. And by the time it becomes evident that a recession is likely, the market is probably getting close to bottoming out, having already priced the recession’s implications into stock prices. Also, when recessions are formally announced by the U.S. National Bureau of Economic Research, it is usually well after the recession has started. By then, the market has often had a substantial recovery (one exception being 2001). Therefore, exiting from the equity markets when a recession starts, and buying back in when the recession is over, has proven to be a poor market timing practice historically. 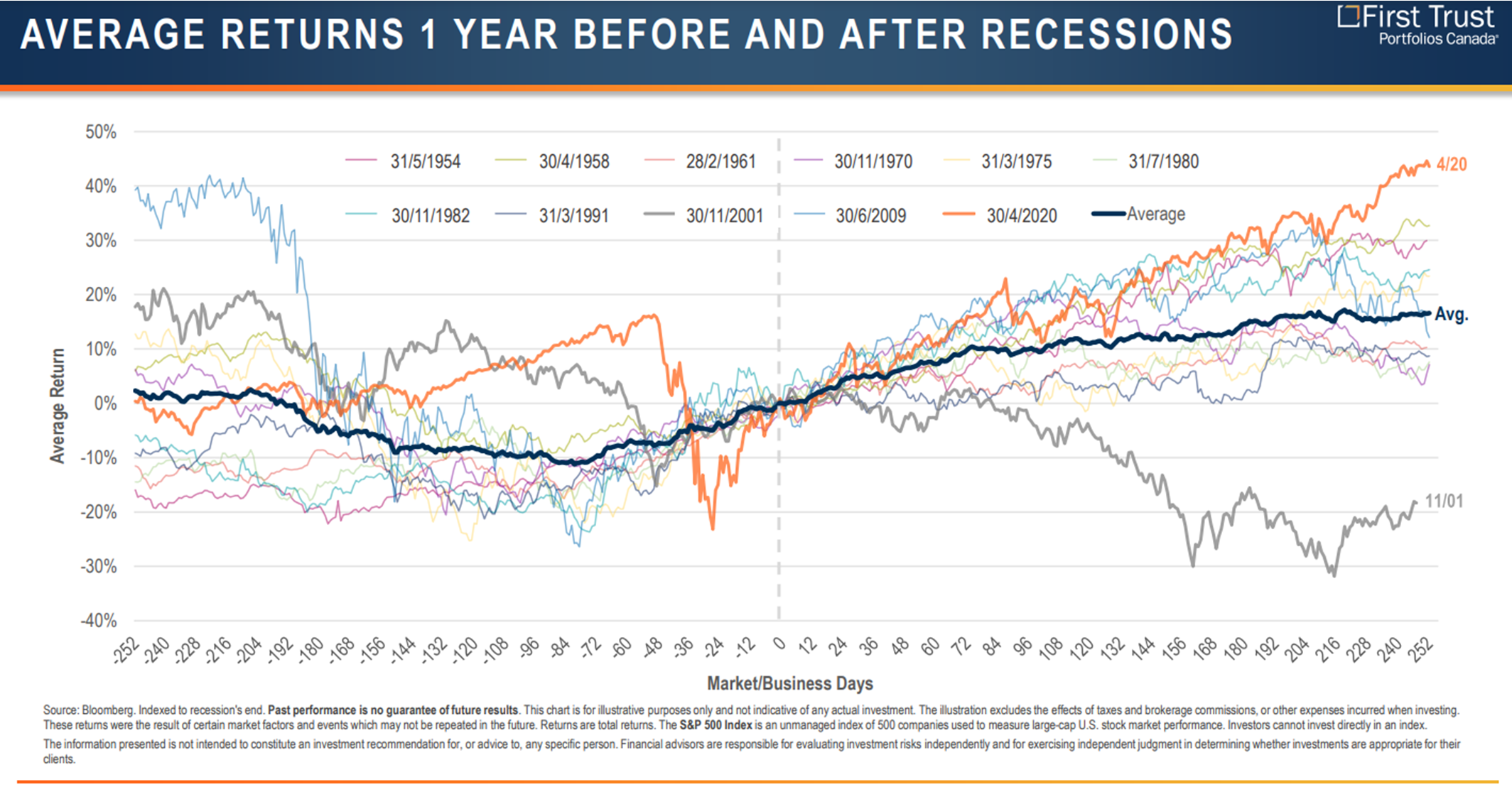