Check out this video if you want to learn how to fish for chipmunks.

In looking for signs of excessive pessimism and angst that can provide a contrarian upside signal, look no further than the S&P 500’s put/call premium, which has recently spiked higher than 2002, 2008, 2016 and 2020. Put and call options are leveraged contracts tied to an underlying stock or index, that are primarily used by institutional and options traders to either speculate up or down, to provide income, or to hedge a position or portfolio. You pay a premium for the put or call contract, giving you the right to sell or buy the stock/index, respectively, at a specific price within a specific time frame. The more in demand a put or call is, the higher the premiums rise. Right now, the cost to protect/insure a portfolio with a put option has never been higher. As you can see in the following chart, the put/call premium on the S&P 500 has spiked off the charts to a level never seen in 20 years. In the past, any level well above 1.5 has been at or close to a very long-term bottom. In 2002, 2016 and 2020 it was very close to the bottom, and in 2008, the signal occurred just a few months (last leg down) prior to the bottom that ultimately started the current secular bull market that we remain in. 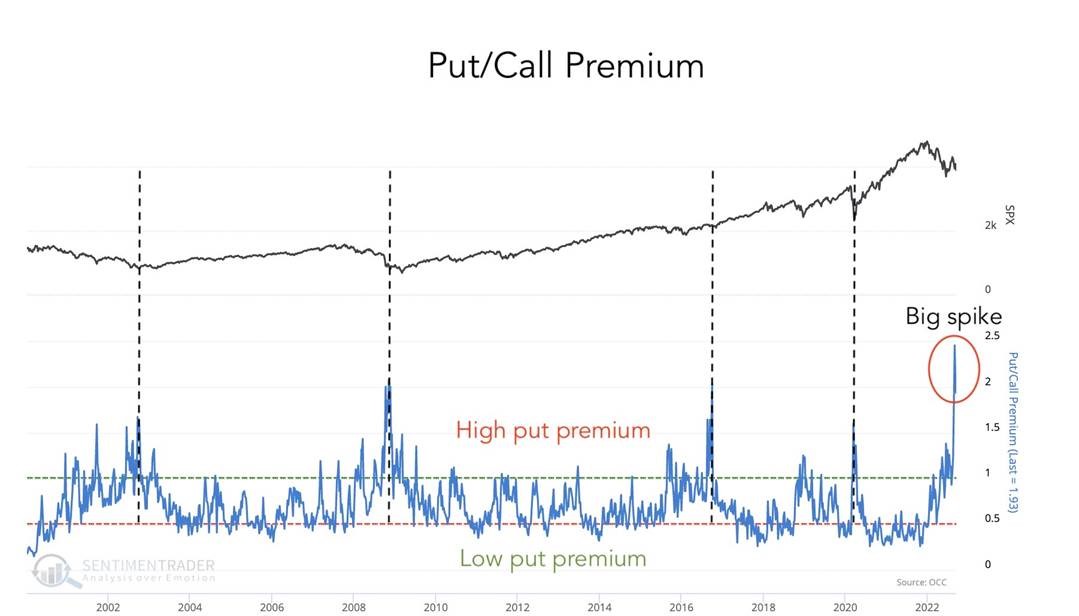 As one can imagine, the recent equity pullback off the summer highs is pushing investor sentiment back to extreme levels. In fact, the American Association of Individual Investors (AAII), a widely followed weekly sentiment survey, is now reporting a bearish sentiment level above 60%, a new high for this cycle. A level above 60% has only occurred a couple of other times going all the way back to start of the survey in July 1987. Just a few readings in 1990 and 2008/9 topped the current bearish sentiment reading of 60.9%. A weekly survey level over 60% has occurred only five times out of 1,669 trading weeks. As painful as markets have been this year, a reading over 60% has resulted in by far the best, if not spectacular, forward-looking returns over the next year (see highlighted line in the table below), almost four times the average return for all periods and with a positive return rate of 80%. While a reading over 60% certainly doesn’t necessarily mean stocks have made their lows, it does suggest forward returns are very good even assuming we make a fresh new low for the market. 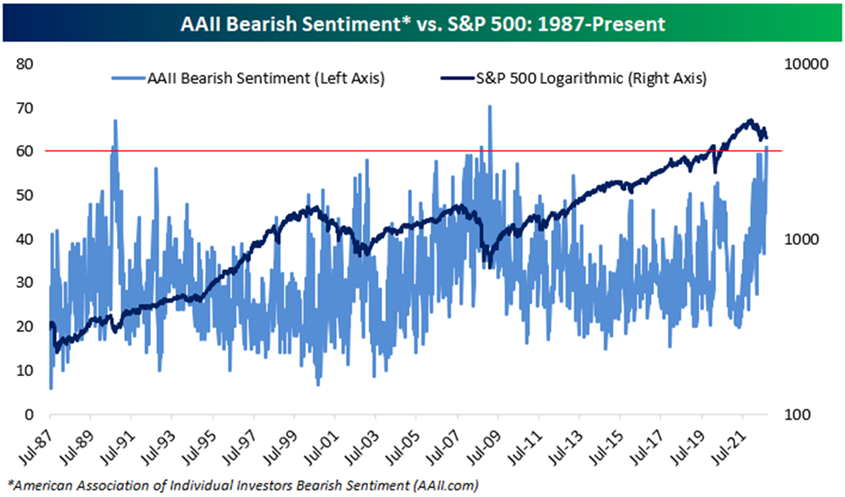 Being as this year is a mid-term U.S. election year, which hasn’t typically been the equity market’s better periods, we thought it would be useful to compare 2022 to other correlated mid-term years where the market was struggling. The S&P 500 is officially down 20% year-to-date as of September; 2022 now joins 1962, 1974, 2001, 2002, and 2008 as the only years to ever do that since 1950. Only 2008 saw things get worse by the end of the year though and only 1962 avoided a recession. We do not believe 2008 is a good comparison to today’s environment. However, 1962 could provide a relatively decent blueprint (beige line below) as it currently looks a lot like 2022 at this point. Other similarities are a new Democratic President, a mid-term year, supply chain issues, Cuban missile crisis, etc. In that year, the S&P 500 didn’t bottom until October 23rd, but then rallied 19% into the end of the year.

The last chart we wanted to show this week is from the Bank of America Global Fund Manager Survey. The latest survey shows that allocations to European equities dropped to a record low. Europe is basically the epicenter of the 2022 macro decline and recession warnings, so we should probably expect to see this. Perhaps we can call it rational fear. However, at some point it will certainly become irrational, and thus a good long-term opportunity. In our Milestone core and ETF mandates, we exited all of our international equity much earlier in the year and we currently remain out of those markets. 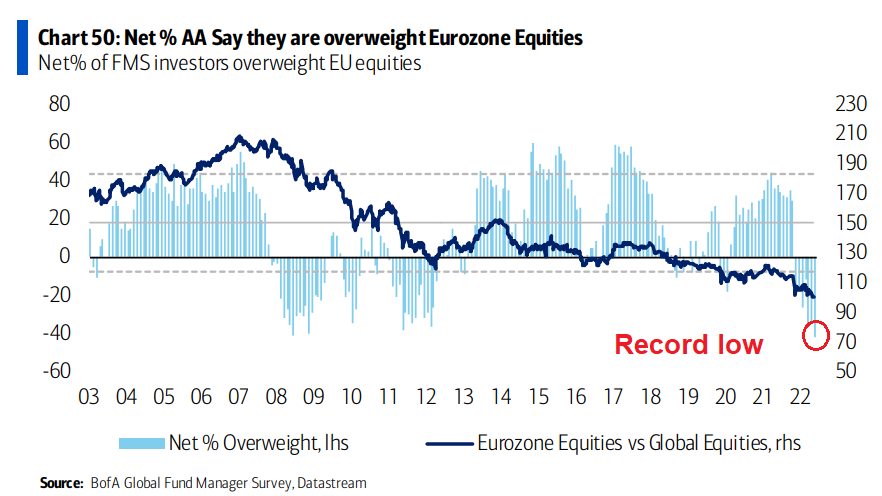