Market Insights: Seasonality - The Heart of the Year

Check out this video of a modern David vs Goliath.

The first three quarters of this year have certainly been one of the most difficult market environments for asset managers to navigate over the last 30 years, especially with the sharp decline in U.S. Treasuries and Canadian Government bond markets, which many consider to be a haven. There is a reason why people consider this part of the market to be a haven. Looking back to 1977 using the Bloomberg U.S. Aggregate Bond Index, this year has been by far the worst for bonds. This index is an aggregate one that includes all government bonds and investment-grade corporate bonds. In those 45 years, bonds in the U.S. have fallen in value over a calendar year only five times, with the most significant decline being just 2.9% in 1994. So far year-to-date, this index is down 14.35% as of September 29th, so when we say a sharp decline, that is an understatement considering the low-risk characteristic of this asset class. There is still one quarter to go this year, but with rates continuing to have upward pressures exerted on them due to inflation, it doesn’t look as if there is a high probability of a sharp turnaround for this market. Perhaps that will be a 2023 headline.

If you look specifically at long-term (20+ years) U.S. Treasuries using the exchange-traded fund (ETF) from iShares (ticker: TLT), the current year-over-year decline for TLT is over 30%, a down year for the ages. For a part of the market that many consider to be safe and boring, that is a shocking number. As per Treasurydirect.com, which is run by the U.S. Treasury Department, “treasury securities are considered a safe and secure investment”. For the last 40 years in the investment industry, when equity markets hit turmoil, market commentaries would include something along the lines of “investors rotated into the safety and security of Treasuries”. A good example of this is the 2008 Global Financial Crisis, where the calendar year total return for this ETF was +33%. Going back to the inception of this ETF in 2003, this has been the worst 1-year period for long bonds on record. The decline is even more than 2009 after bonds sharply retreated from a massive increase in value due to the Global Financial Crisis. It would also be surprising to most to hear that long-term U.S. bonds are down more than the tech-heavy NASDAQ stock index this year. 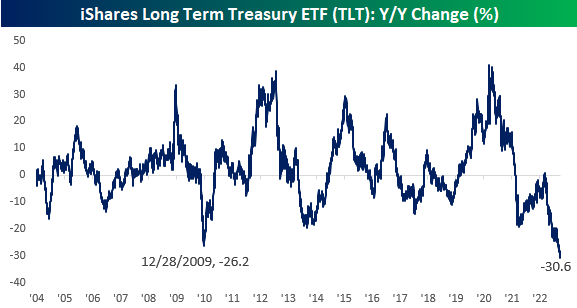 One positive for equities, on the other hand, in terms of where we are in the calendar year, is that we are now entering what is normally considered the strongest period for equities. In fact, as the following chart shows, from 1991 - 2021 the best time to invest based on rolling median three-month returns for the S&P 500 is between late September and early October. Historically, the best day turns out to be October 10th with a median forward 3-month return of almost 7%. This would surely be welcomed and well-timed to alleviate some of the drawdown the markets have experienced this year. The second chart looks at the frequency of positive forward 3-month returns, and this Tuesday, October 4th is the historically best day of the year with a positive rate of almost 90%. 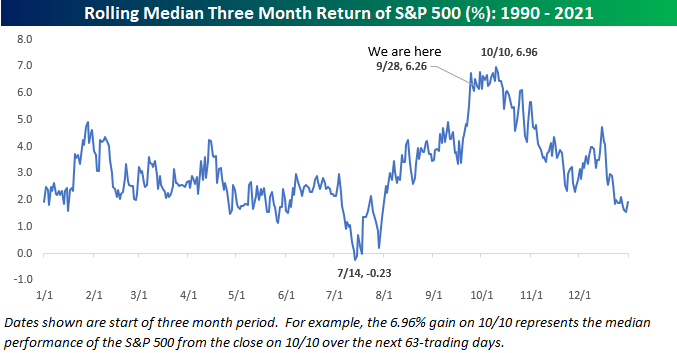 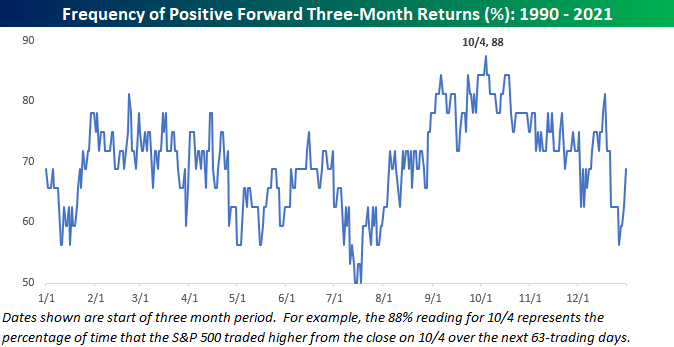 Last week, we discussed how the widely followed weekly bearish sentiment survey from the American Association of Individual Investors (AAII) went over a level of 60% for only the 5th time since the start of the survey in July 1987. We noted that the forward 1-year return for the other occurrences averaged over 30%, close to four times the historical average for all other periods. We wanted to add to that by illustrating these points in time on a chart of the S&P 500 (green arrows below), to help you visualize how rare this is. On the positive side, the only two periods of time this has occurred (1990 and 2008/9) were at or near the start of two of the longest bull markets on record. 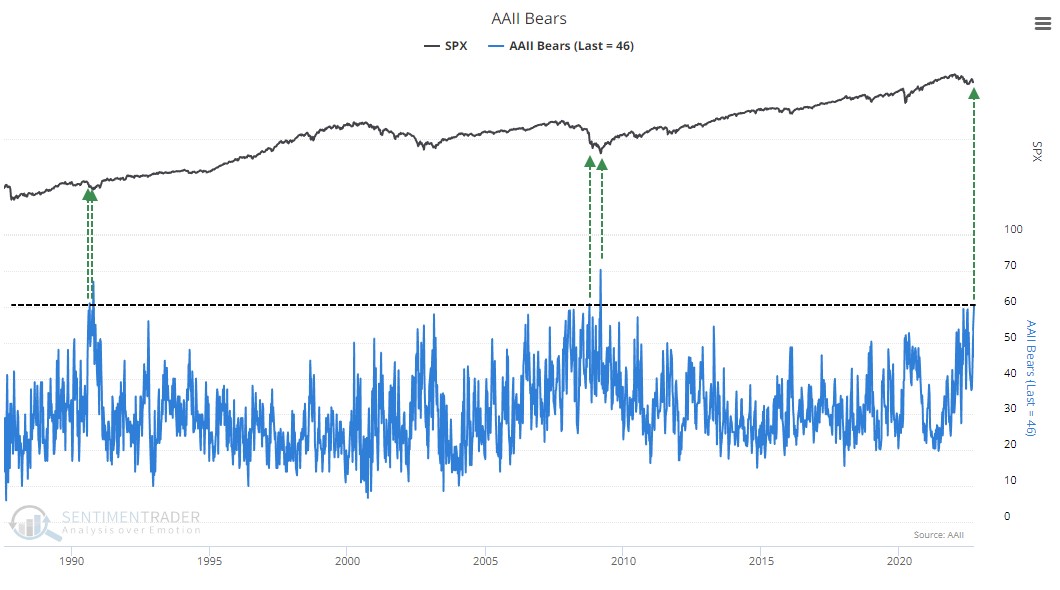 To finish this week’s charts, with U.S. midterm elections coming up on November 8th, we wanted to highlight where we are currently based on the 4-year U.S. Presidential Cycle. Historically, the second year of the 4-year cycle has been the worst. This year (red line) has no doubt been subpar even the normal trend (blue line). However, based on seasonal trends, in the entire 4-year cycle, this may now be the best time to be buying stocks. Long-term investors could well be rewarded. 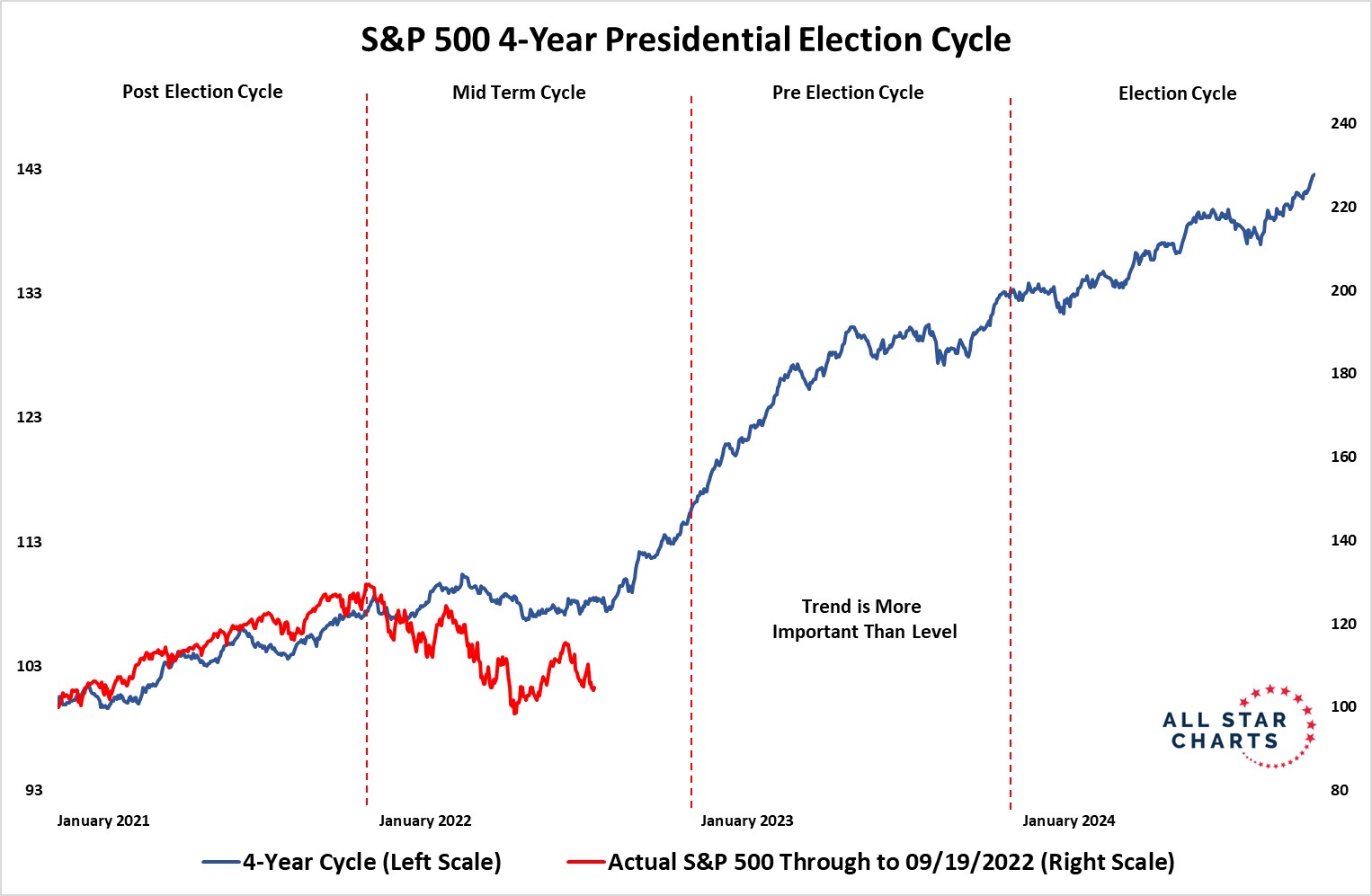