Do you ever wonder what your dog does when you’re not looking?

In the last few weeks, we have tended to start off by saying “it was another wild one”. Not quite so much this week, where we have seen markets stabilizing to some degree in search of a major low and bouncing nicely off it’s 4-year moving average. The U.S. stock market advanced close to 5% this week and just over 6% from its intra-week low last week, while the Canadian stock market was up close to 3% this week and close to 5% from its last intra-week low. We have seen some strong support from institutional investors, who are buying at these levels from retail investors. This is often a sign of capitulation by retail investors, and usually a positive sign for forward-looking returns. Margin debt is off the record highs set last year, and the speed of deleveraging suggests excessive investor pessimism. The U.S. margin debt 15-month rate of change has recently entered an extreme oversold level not seen since 2001-2 and 2008-9. It has yet to turn back up, but when it does, equity markets have historically provided significantly above average gains up to 18 months later. Markets are also now heading into what is known as the seasonally strong period from the end of October to early May. In addition, there is the added potential tailwind of the third year of the U.S. presidential cycle (post-mid-term elections) which has historically been the best year out of the four.

Speaking to U.S. mid-term election years, this year has been tracking the typical pattern, albeit to a much greater degree of downside. But as we noted, equity markets have historically performed strongly leading up to the mid-terms and the 12-month period following. 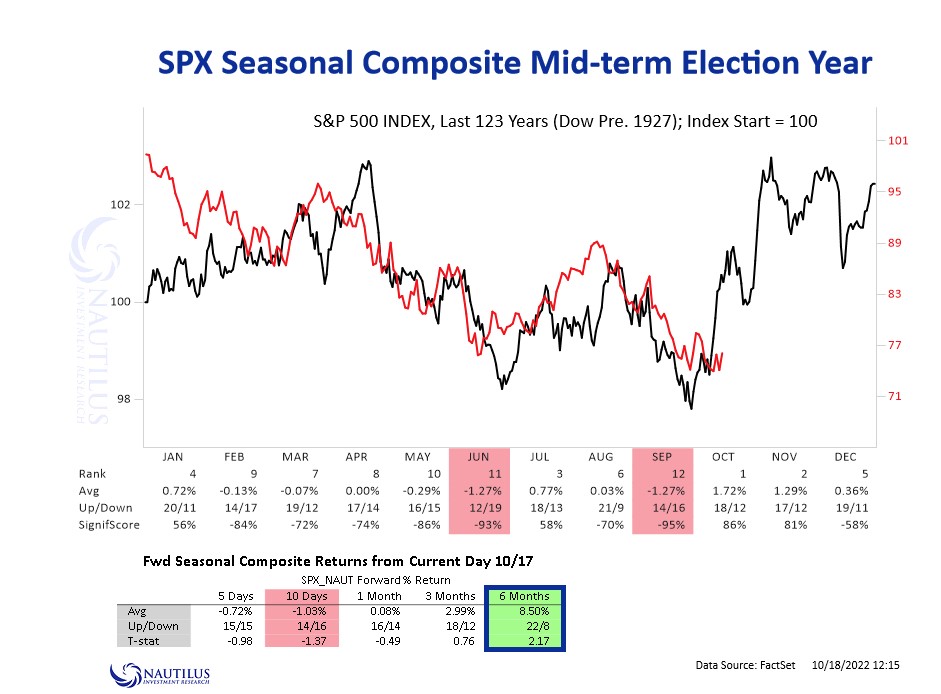 We will finish this week’s comment with a chart showing ‘all-or-nothing’ days for the S&P 500. An ‘all-or-nothing’ day is when the S&P 500’s advance/decline reading is less than -400 or greater than +400. In other words, more than 400 out of the 500 stocks are either all down or up on the day. On Monday, the number of these days on a 25-day (5-week) rolling total hit a level only seen a handful of times going all the way back to 1990. It hit a level of 12 days - which is just three days shy of the record set very close to the COVID crash low. In all, this is only the 6th time where this level has hit 10 or more days. In addition, the second chart shows these periods – indicated by red dots - on a chart of the S&P 500. As one can see, these periods have occurred at or near major long-term lows. The accompanying table below summarizes the forward-looking returns after these instances. Elevated numbers of ‘all-or-nothing’ days have historically coincided with weak and uncertain market environments like today. However, in the case of this signal which has occurred five prior times since 1990, that uncertainly led to opportunity, with historical forward-looking returns being on average 10.6% over the next six months and 24% over the next year - more than double the average for all other periods. 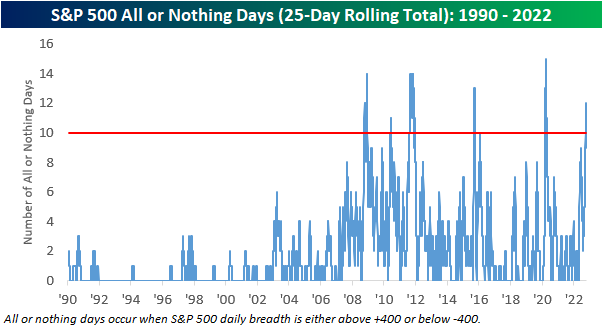 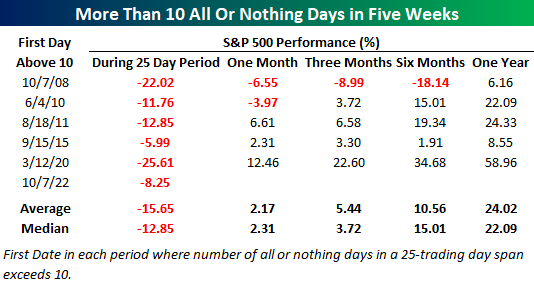