The movie of the summer.

We have discussed equity investing seasonality many times in our comments over the years. As we have now welcomed November, we wanted to highlight this month as the first of the seasonally strong six months for equities. In addition, we are also about to begin the best period to be invested from the perspective of the four-year U.S. Presidential Cycle.

The following chart illustrates well what we mean by the seasonally strong period for equities. As you can see, if one was only invested in the market from the beginning of November to the end of April, their total cumulative return (including dividends) since 1998 would be 958% versus just 196% for the remaining months (May-October) for the same years. These numbers are even more drastic if you go back to 1928, where your cumulative price return (not including dividends) would have been 5,145% vs. 274%. You may be asking yourself “why not implement this strategy?”. The main reason of course is that if you are fully invested the entire period, your return is even larger compared to just owning from November to April. In addition, this pattern doesn’t hold true every year, but does hold true for a majority. For example, the S&P 500 dropped significantly the last two months of 2018, and we all remember the first quarter of 2020, especially March, where the S&P 500 was down at one point 35% peak to trough over just a four-week period from late February to late March. The total return for the S&P 500 from November 1, 2019, to April 30, 2020 ended up being -3.1% (only thanks to a sharp recovery in April). However, the total return during the seasonally weak period of May 1, 2020, to October 31, 2020, was 13.3%. It would have been very detrimental to not stay invested over this year. As we stand today however, equity seasonality still provides a potential tailwind from now until April. 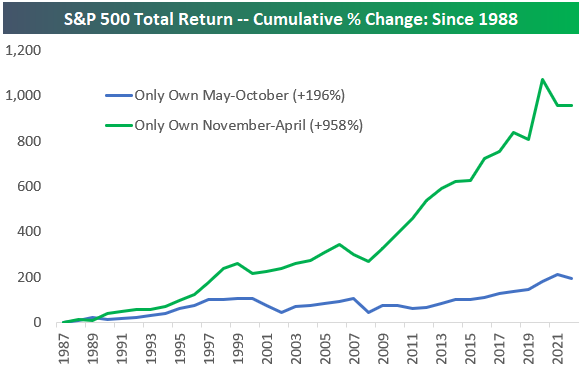 Looking at November specifically, here is a table that shows how the U.S. Dow Jones Industrial Average has performed each month of the year, going back various periods over the last 100 years. We have highlighted November, which has been the second-best month in the last 20 and 50 years, only behind April. The positive percent rate at 70% is the strongest in the last 50 years (along with December) and the third best over the last 20 years. 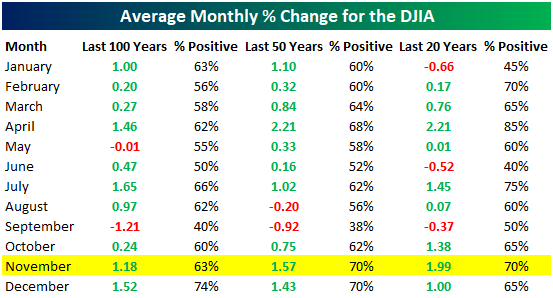 Moving on to the U.S. Presidential Cycle, November 8th marks the US Mid-Term Election date. According to political polls from FiveThirtyEight.com, it appears the Republicans will regain control of Congress. Based on history, regardless of who has control of Congress, the third year of the four-year election cycle has been by far the strongest for equities, and even more so for the 6-month period (which is in line with the equity seasonality factor above) right after the Mid-Terms. The second year of the cycle, which it is right now in 2022, has historically been the worst. Where do we stand this year versus past second years of the cycle? As you will see below, the current year is in orange, and the blue line is all second years dating back to 1928. It has been a very difficult one so far this year, but there is hope looking at the historical blue line for the last two months of the year. 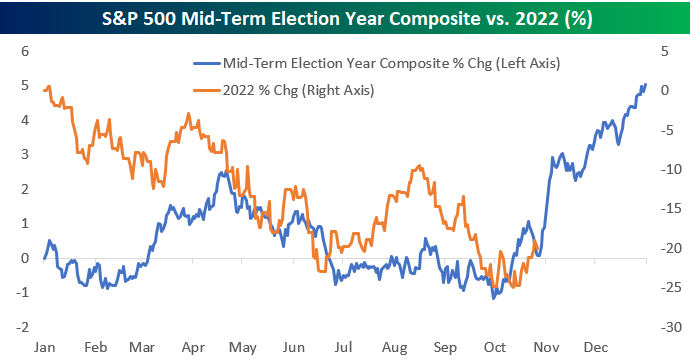 Here is a composite chart for the S&P 500 throughout the U.S. Presidential Cycle (blue line) with the current cycle (orange line) of Biden’s time overlaid. You will note the average price return of those calendar years at the bottom of the chart. While the magnitude of the up and down movements of the past two years has been much larger than the average of the past, the pattern could still hold true. If there was ever a time for a tailwind of both equity seasonality and the U.S. Presidential cycle, especially the next six months, now may be that time. 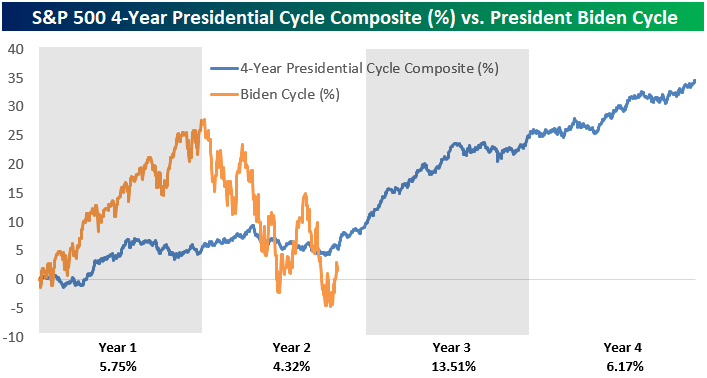