On Thursday, the S&P 500 gained 5.54%; the 15th-best trading day since 1953, when the current 5-day trading week began. The table below shows historical performance of trading days with 5%+ increases since 1953. Although welcome news, historically the S&P 500 has declined on average 0.77% the next day and fallen 1.73% the following week. This is often seen as a small correction to a massive rally. In contrast, however, the index has averaged a 10.37% increase over the next 6 months and averaged 27.95% over the next year with positive returns occurring 20 out of 22 times. This forward 1-year average return of 28% is more than two and a half times larger than normal for all periods. At market close today, the S&P 500 closed 0.92% higher. 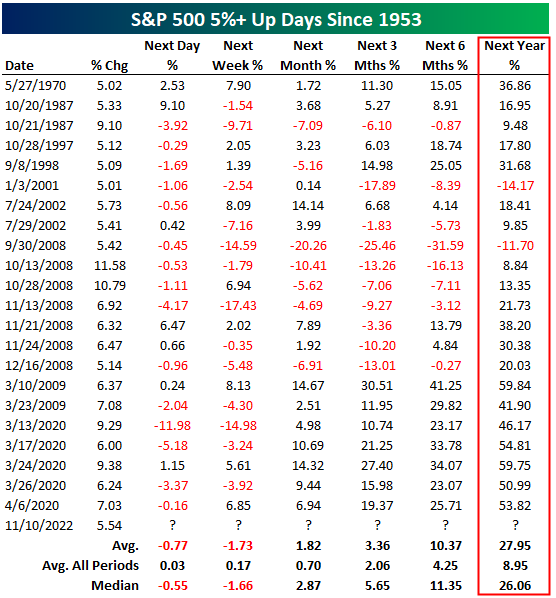 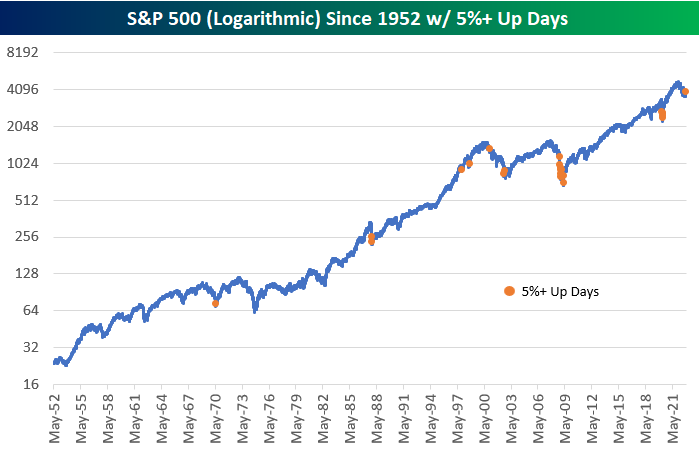 U.S. Headline and Core CPI numbers on Thursday came in below analyst expectations led by lower medical care costs, lower rent growth, a drop in average used vehicle prices, and lower costs for durables. As of yesterday, when the chart was generated, stocks were up 4.2% and closed up 5.54%, beating the previous highest single CPI rally increase since 2000 (2008 at 5.1%). Also, bond prices saw a rally yesterday with 2-year yields down 30 bps (largest decline since 2008). Balanced portfolios (60/40 split of equities and fixed income) also saw relief, increasing over 3% based on a hypothetical blended portfolio using the Bloomberg Aggregate Bond Index and the S&P 500. 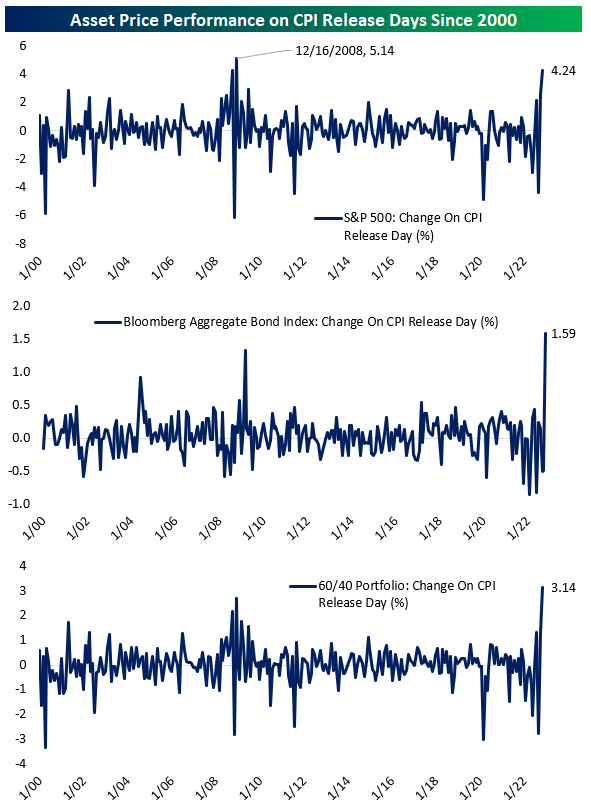 This week’s U.S. CPI news is a good start, but where will the Fed go from here? The chart below shows the actual CPI year-over-year (YoY)% by month and the Fed Funds rate %. The chart also shows future YoY CPI changes month-over-month (MoM) and hypothetical future Fed Fund rates. To get back to the 2% CPI YoY range by the middle of 2023, we would need to see future CPI increases limited to 0.2% MoM based on expected Fed Fund futures. If CPI continues growing at 0.4% MoM, headline CPI would end just under 5% by September 2023, provided this data holds true. 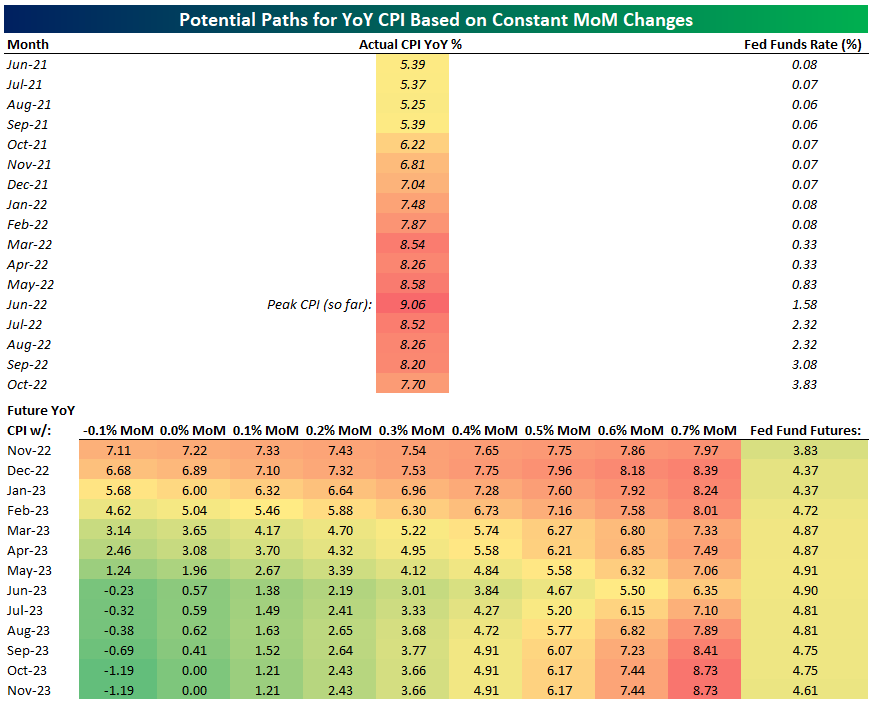 Positive Breadth Around the 200-DMA:

The 200-day moving average (DMA) is used to help filter out noise from single-day or shorter movements by reflecting a longer-term trend. As demonstrated in the chart below, the S&P 500 ETF’s (SPY) 200-DMA has been trending lower for the past 6 months and has not closed above its 200-day average since the downturn began. 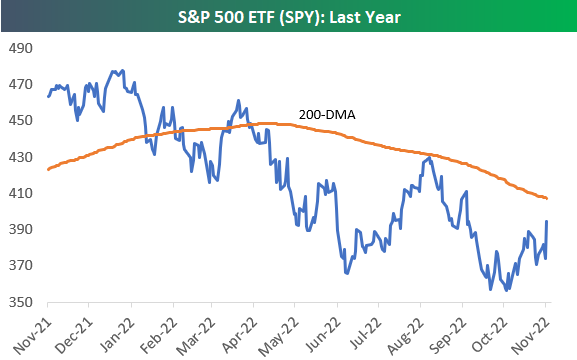 Although the ETF is trading up 10% from its October low, it is still more than 3% below its 200-day moving average. 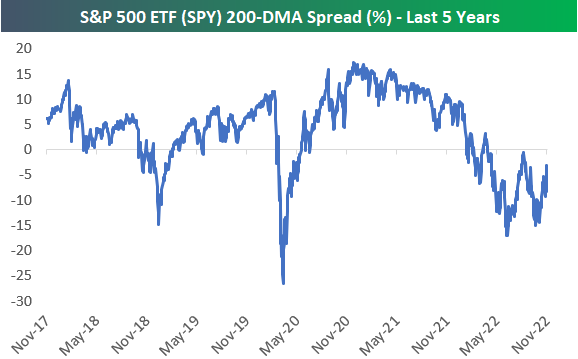 There is room for optimism; with the rally yesterday, we saw over 50% of the companies that make up the S&P 500 close above their own 200-day moving average, as seen in the chart below. While the S&P 500 index as a whole, remains 3% below its 200-DMA, we are starting to see more companies trend in a positive direction. This is an important positive divergence for markets. 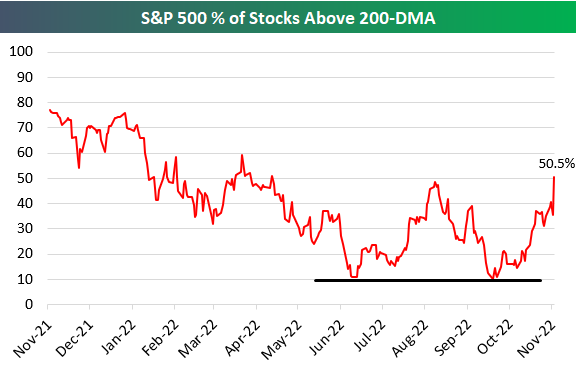